This is Totally Worth it

I sat down with Nathan to talk about how his accident changed his course in life, and how he made the best of it. He talks about his new job as a career counselor at CareerLink in Philadelphia.

This is totally worth it

When a tragic accident takes away his first dream, Nathan Schlingmann finds a new one.

Nathan Schlingmann works as the only career counselor at CareerLink in Philadelphia. He works with 60 clients that are all experienced professionals unable to find a job or transition to a new career. He started a support group that meets every Thursday afternoon for one hour. One of the biggest ways he says it helps is just being in a group experiencing the same thing, and that working together in a forward motion is what really lifts their spirits.

“Today, two years is a long time to spend at a position, and a lot of older professionals are used to a world where you could spend time with a company and then move on to a higher position with a different company, but now that is not the case. A lot of jobs are getting cut from the marketplace completely. The perfect example is lawyers, how could they disappear? Many programs are doing the work of research and litigation. What took weeks now takes an hour.”

Helping people find their calling is his dream job, but before this dream, he had another. Before a life-changing accident in 2003, Nathan Schlingmann was a college student pursuing a career in wildlife biology. He grew up with a deep love of the outdoors. Hiking, biking, and catching frogs was his idea of fun. A typical day as a wildlife biologist for him was hiking up a mountain with a group of partners, pitching a tent, and eating oatmeal around the campfire, and then waking up at the crack of dawn to get to work. They would trek to different creeks, catching tailed frogs and giant salamanders in big nets to count and release.

Nathan expected his life to continue that way. He planned to travel the world and do his job at different wildlife reserves. He had experience and credibility, and during his senior year of college, he was hired to lead a crew of wildlife biologists. A quote that stuck with him from a college trip to a reserve his freshman year of college was “the worst day in the field is better than the best day in the office.” He still agrees.

But that dream became impossible after a trip to Europe ended because of an accident. He joined many bike tours with groups of friends all over Europe while studying abroad. On one of these bike tours, he rode with his friends from Amsterdam to Florence. During his last weekend there, Nathan got hit by a speeding Toyota Camry. Both of his lungs collapsed. Luckily there was a medical doctor in the car behind him. The doctor gave him life-saving CPR and called a helicopter to fly him to the hospital.

He woke up a month later in Connecticut with no memory of the accident. He suffered from a traumatic brain injury, 15 fractures in the spine and a burst tl2 fracture. The doctors diagnosed him as paraplegic and believed he would never walk again.

After months in the hospital and physical therapy, Schlingmann regained motion in his right leg. He had a lot of mixed feelings. He was able to stand up again, but he wasn’t able to do the things that he wanted. He fell into a depressed logic—if he wasn’t able to do all the things that he loved, that all of his friendships and his love of life was based on, what was the point?

“I remember not being able to get my wheelchair over the ledge and into the house and just being so pissed, and being pissed off for the next couple months.” He says, “anger and determination,” ultimately propelled him forward.

Schlingmann worked every day to improve himself a little bit. He went from a wheelchair to a walker, to crutches, and now he is able to walk around. He uses an orthotic, which is like a big leg brace.

That determination also got him back on his bike. Schlingmann went to watch a group of his friends at an expert mountain biking race in Vermont. He saw a person blast down the mountain on his mountain bike past his friends, and as he went down the hill he noticed that he only had one leg. He thought he was like a superhero. After seeing that, he emailed the man and asked for advice on how to start biking again. He told Schlingmann to get specific tools for his bike, gave him tips, and told him to just go for it.

“He inspired me to ride again. The scary part was if I stop, how do I put my foot down? I did some trial runs and grabbed a pole and eventually figured it out.”

After his accident, Schlingmann became a math teacher at an inner city school in North Philadelphia.

“I remember my orthotic device failing. So I’d be teaching and just fall in front of the class. It was tough, but teaching made me realize how lucky I still was. Even with my bum leg, I could still take the bus to the nice neighborhood and go out to eat. I remember a kid telling me ‘I heard so many gunshots last night’ and I’ve never experienced that.”

One night after grading tests and being unhappy with where he was, Schlingmann was browsing the internet and saw that being a career counselor was a job. He loved helping others, but he needed to do something different. He was excited at the thought of helping people find a career. He went back to school for counseling at Naropa University where he majored in Mindfulness-Based Counseling Psychology. He started working at CareerLink in March.

“I do use mindfulness in this work because I found a lot of my healing with it. One of the times I felt the most at peace after my accident was after a ten-day meditation retreat…focusing on the present moment, the breath. A lot of people… just want people to get back out there and get a job, but being at peace in the present moment is key for creating a great future, and what’s alive in their past is part of their present.”

Schlingmann takes a lot of inspiration from Buddhist teachings—that all pain and suffering comes from resisting reality and being attached to something in the past. With a trauma like losing a job, people are craving and clinging to the past or the future, and reject the position of being a job seeker.

Still, Schlingmann says he can’t get too romantic. Since he started in March, only five people he’s worked with have gotten jobs. It is discouraging, but he can’t let it get to him too much because he is doing all that he can. 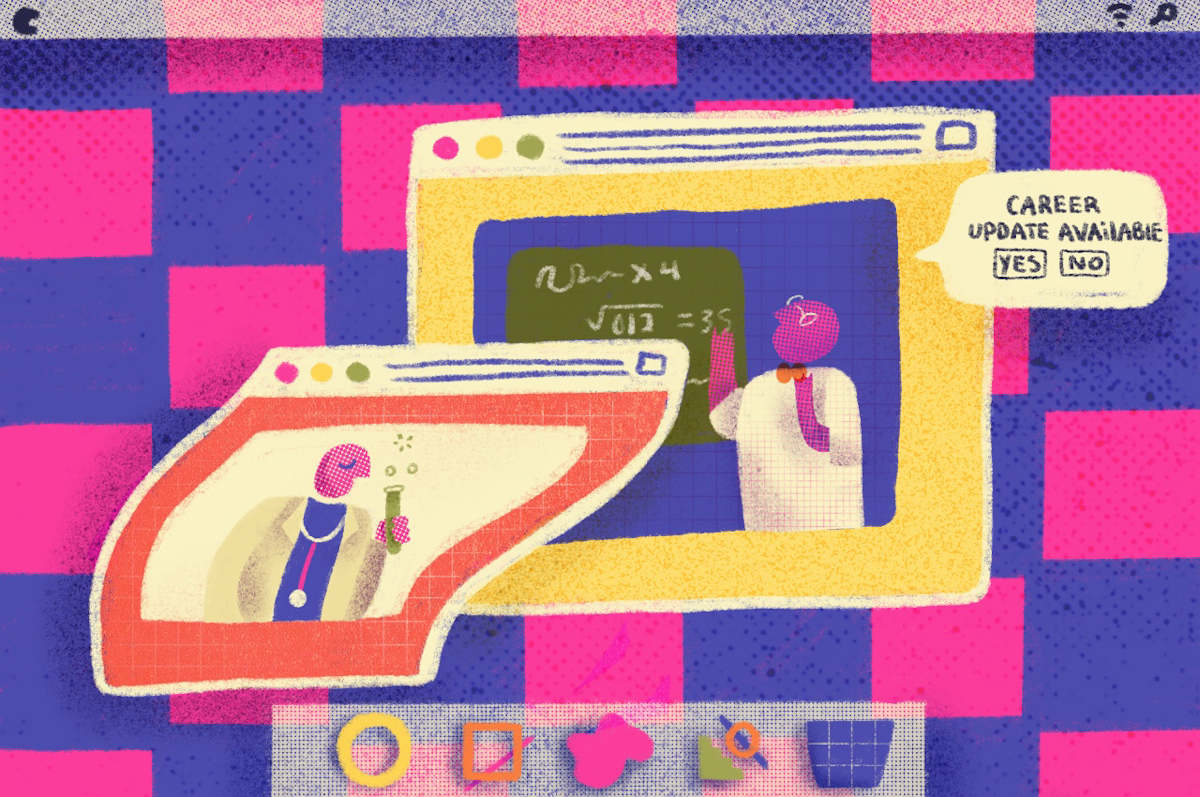 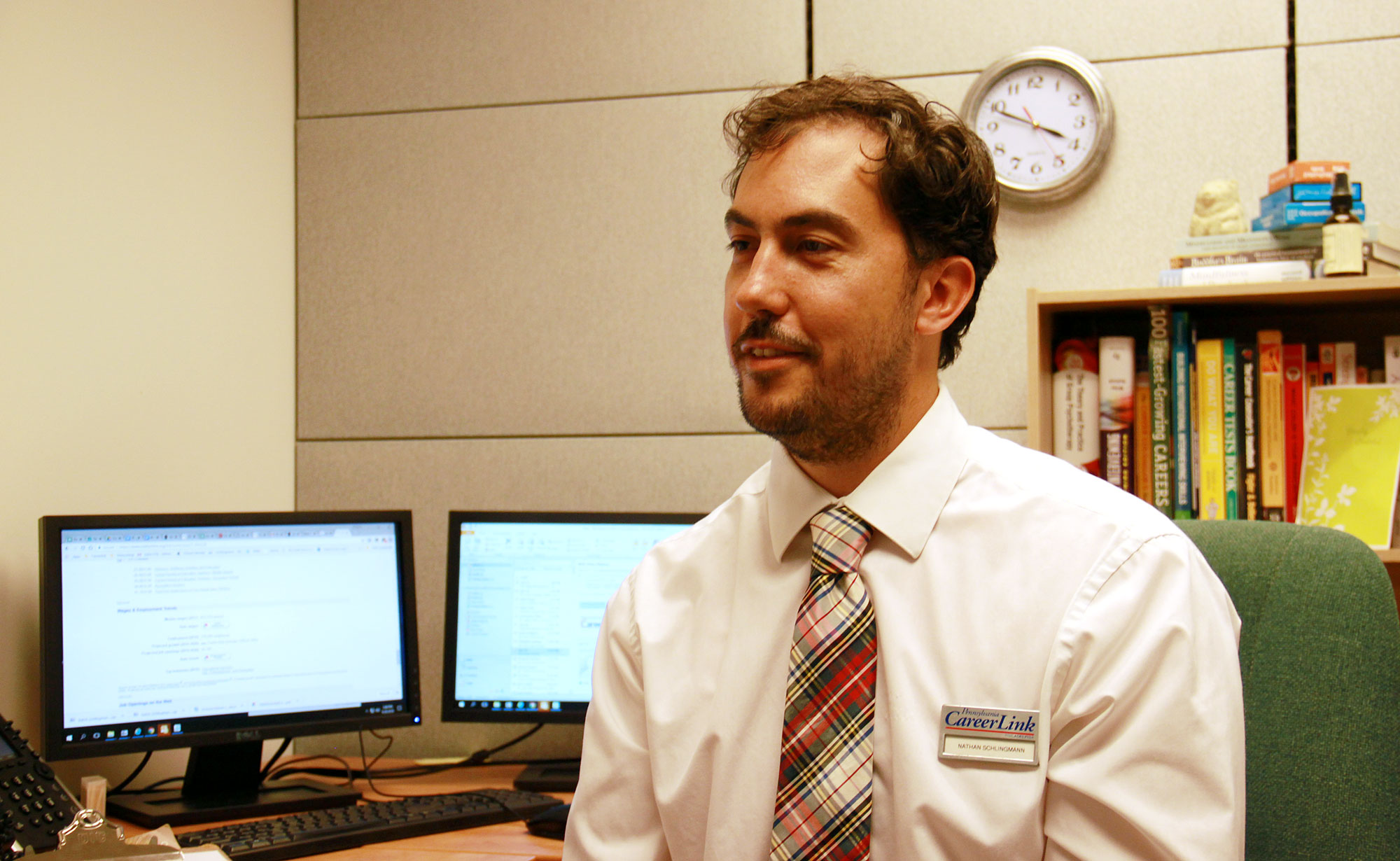 Nate Schlingmann meets one-on-one with his clients for an hour at time to help them focus on finding meaningful work. Photo: Kaity Kline/Next Generation Radio 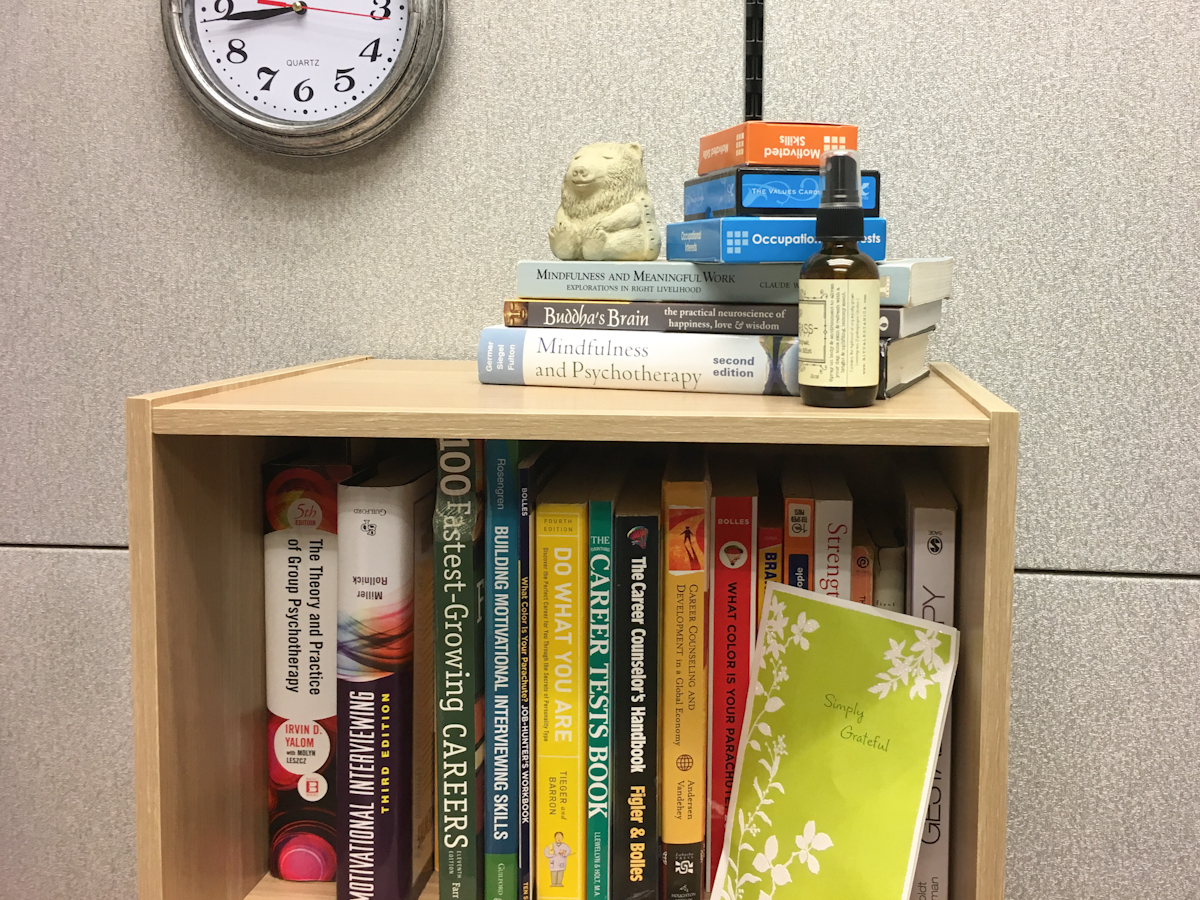 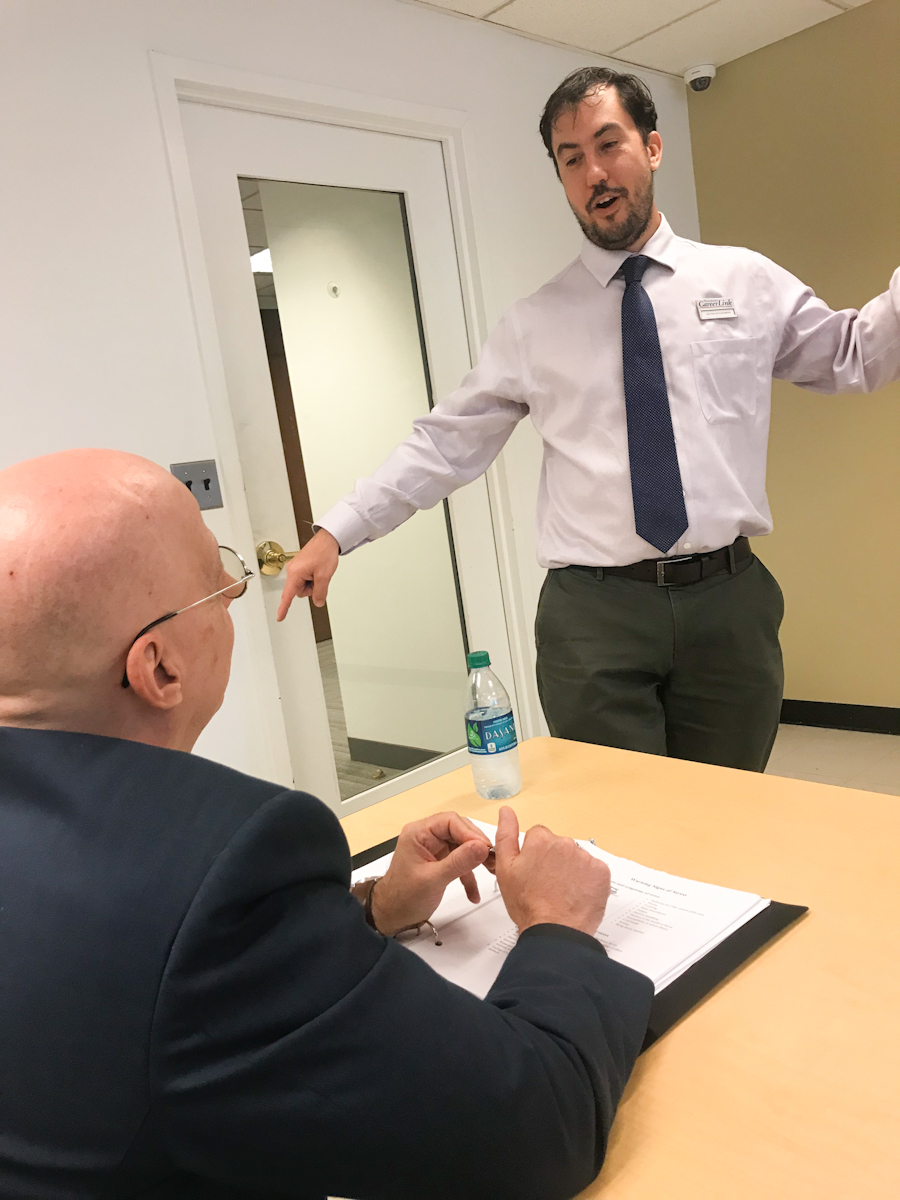 Schlingmann chats with a client during the Professional Networking Group at CareerLink. Photo: Angela Stassi for Next Generation Radio.