A North Philadelphia neighborhood, surrounded by gentrification has seen two-acres of vacant land transform into the Life Do Grow Farm–a place they call their refuge.

For decades, a vacant two-acre square plot located between 11th and 12th Streets, and Dauphin and York Streets in North Philadelphia was a dumping ground. The trash covered grounds, was filled with over-grown weeds and old car tires, and was often unlit.

Jeaninne Kayembe, 28, said after the collective returned from doing Hurricane Katrina relief work five years after the storm, they began noticing other community projects around the country; they met with their community to create a solution for the vacant lot.

“Before we put a plant in the ground, we canvassed for a good six months to a year, and we had meetings with our young people, with neighbors, asking what they felt like this place could be,” Kayembe said.

In 2010, this idea came to life. The Urban Creators have worked with several other non-profits and city officials to begin the community garden Life Do Grow.

“We aspire to, you know…at the minimum, create a garden, and then the garden became a farm, which is way bigger.” Kayembe said. “And then, from the farm, it turned into this music venue, art gallery, [and] wedding chapel. Now it has its endless possibilities.

On July 21, the farm will host its fifth annual Hoodstock festival—a one-day outdoor event. This year’s theme is Black Girl Magic, a celebration with performances of 100 black female singers, rappers, and dancers.

Mary Baxter, also known as ‘Isis Tha Saviour’, a 36-year-old rapper and mother, will perform at Hoodstock. Isis has used the farm as a space to express her musical talent. She will debut her newest song “The Corner.” Isis said the song references her personal experience of being incarcerated for seven months while pregnant.

“I’m working in support for the Dignity for Incarcerated Women Act which is a piece of legislation that’s being spearheaded by Cory Booker and Elizabeth Warren to stop women who are pregnant from being shackled while they give birth at the federal level,” Baxter said. “So I experienced that with my son. I was shackled to a bed for 43 hours while I was in labor at Einstein Hospital, and eventually gave birth by emergency C-section. So this is very personal and dear to me.”

Life Do Grow has youth-focused programs. Students and graduates can work on the farm for pay. There is also a Youth Action Assembly, which focuses on helping youths engage and have their voices heard within local politics. The Summer Youth Leadership Program is 6 weeks long, during which students work full-time on the farm, as well as attend workshops and learn about trades of their choosing. Lastly is “REGENERATION”, a program where the mission is to improve overall public health and safety by providing transitional training for previously incarcerated youths.

Nyseem Smith, 23, is the director of youth and community engagement at the farm.

“The mission of the farm to the youth is actually not really based around farming or urban agriculture at all,” Smith said. “It’s actually about identifying their interests and what they want to pursue.”

Smith works with youth like Nasir Sybert, 18, and a recent high school graduate who has been working at the farm for two years. Sybert said he has found purpose.

“Some of my friends don’t believe that there’s a garden in this type of neighborhood,” Sybert said. “This stuff just changed me around. [The farm] taught me my rights, how to respect my community.”

Sybert is a recent graduate of A. Phillip Randolph Technical High School in Philadelphia where he studied construction. He said one of his most memorable experiences is building the large, white geo-dome that sits in the middle of the farm. The geo-dome was used for the wedding of Stanley Morgan, farm manager, and Kirtrina Baxter, former farm manager earlier this month. This was the first wedding at the farm.

“I [would] like to see more people involved,” Sybert said. “Like people I hang with sitting over there. I be telling them to come over here and chill over here sometimes, like come check this stuff out sometime. [This farm can] change you around. It changed me around a lot. I’m happy I got involved.”

Every Tuesday, Life Do Grow volunteers, youth and staff harvest, clean and bag produce from the farm to sell to their neighbors. Generally, the market is set up on 11th and Arizona Streets or around the Peace Park located next to the farm.

One of the younger volunteers, Imani Issac, 12, assists with preparation for the market. Issac was introduced to the farm by her uncle Stanley Morgan, farm manager of Life Grow Do. Issac said she prefers to volunteer over her summer rather than join a summer camp.

Inspired by the work at the farm, Issac says she wants to open a health-based bakery when she graduates, where she sells items but gives them away too.

“I feel like somebody should know how to do this [farming]” Issac says, “You can provide it [produce] for you and your family, and at the same time have fun learning how to plant things…like you can plant your favorite vegetable.”

“Herbs are kinda like hair, they grow thick,” Sonia Galiber, director of operations at Life Do Grow said while harvesting dried oregano and chamomile herbs.

Galiber said the farm plans to sell their own mixtures of dried herb tea at Hoodstock. 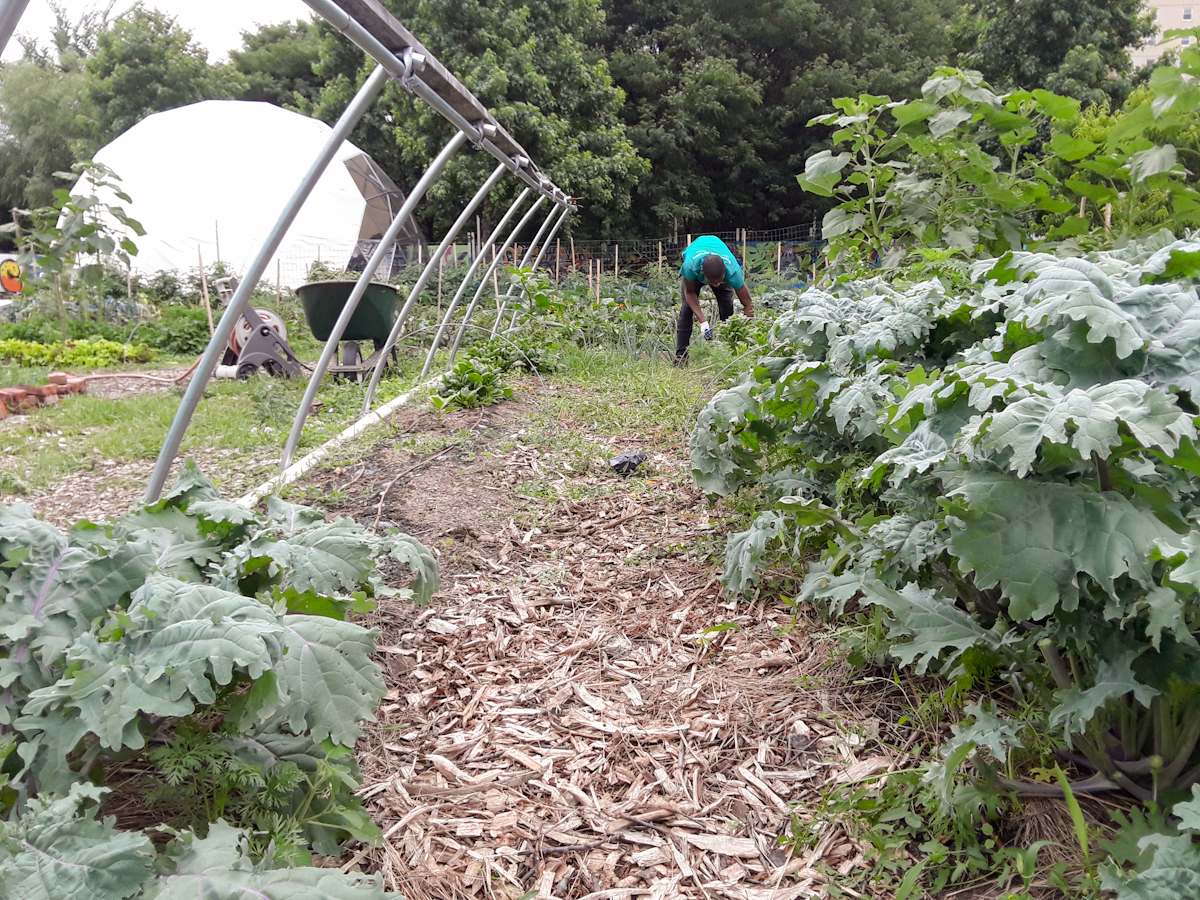 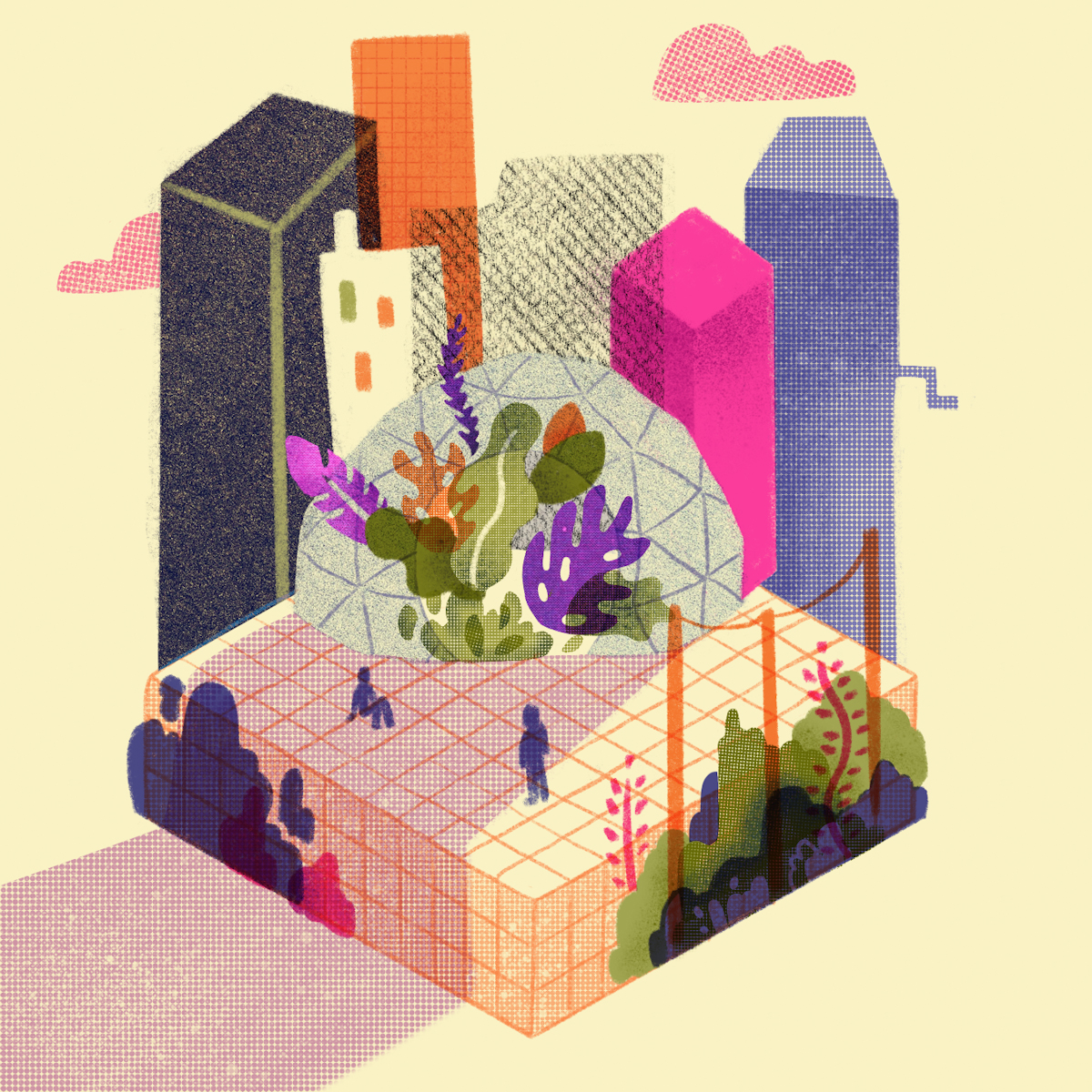 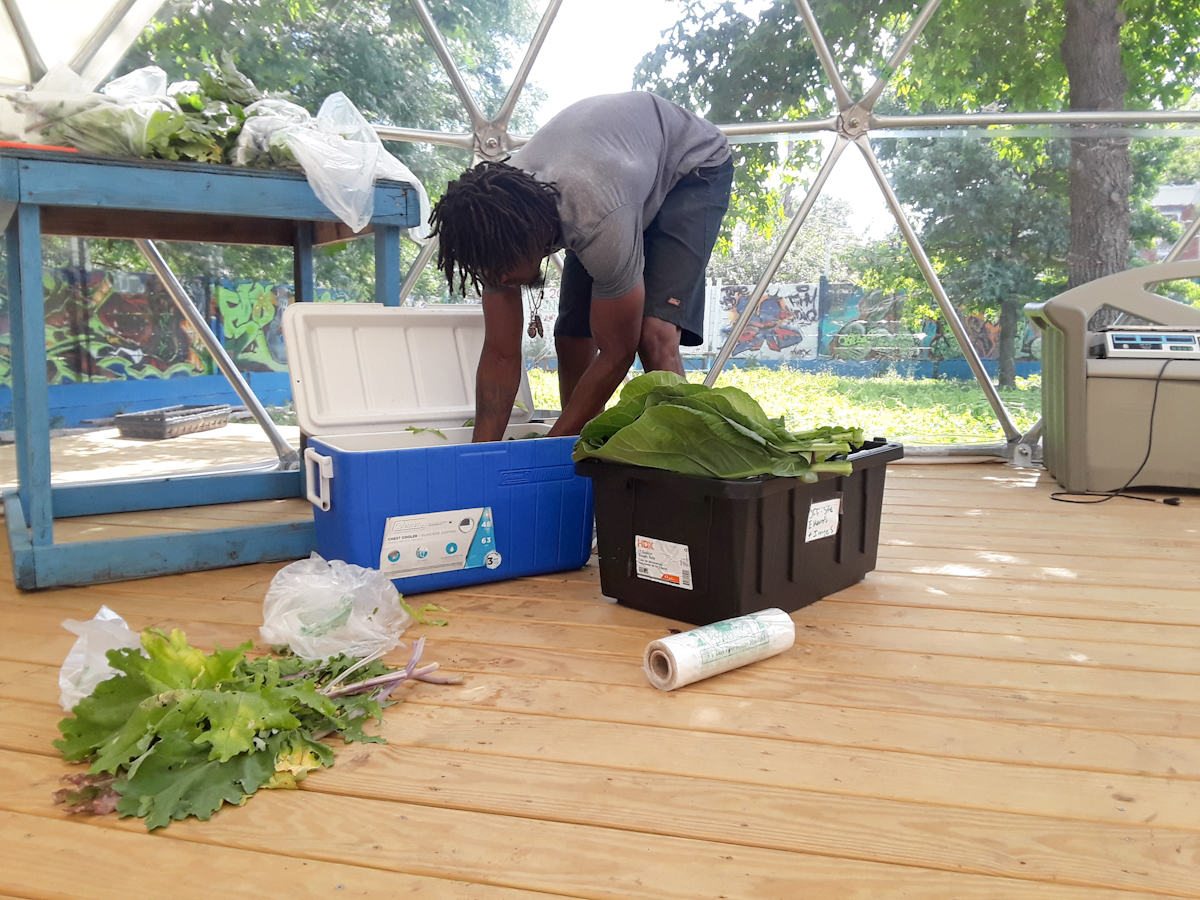 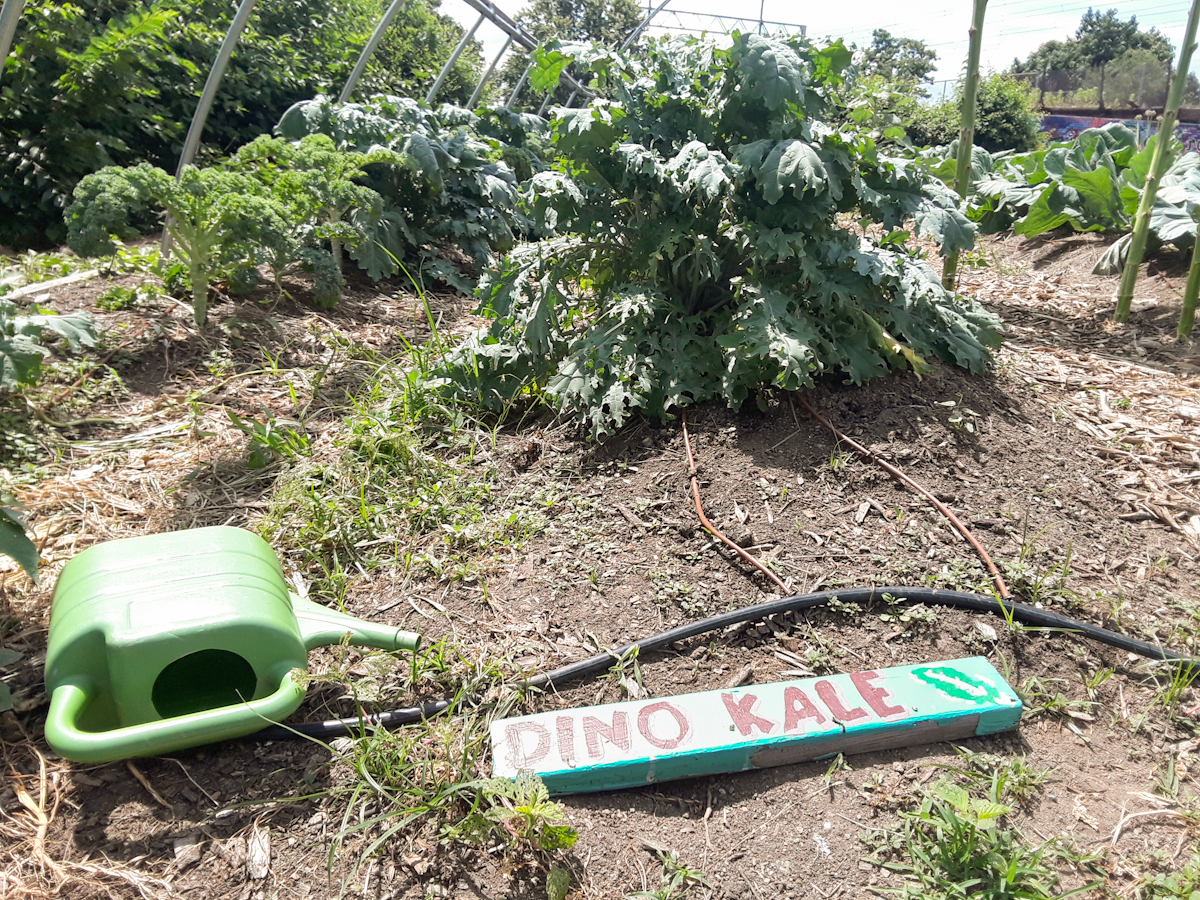 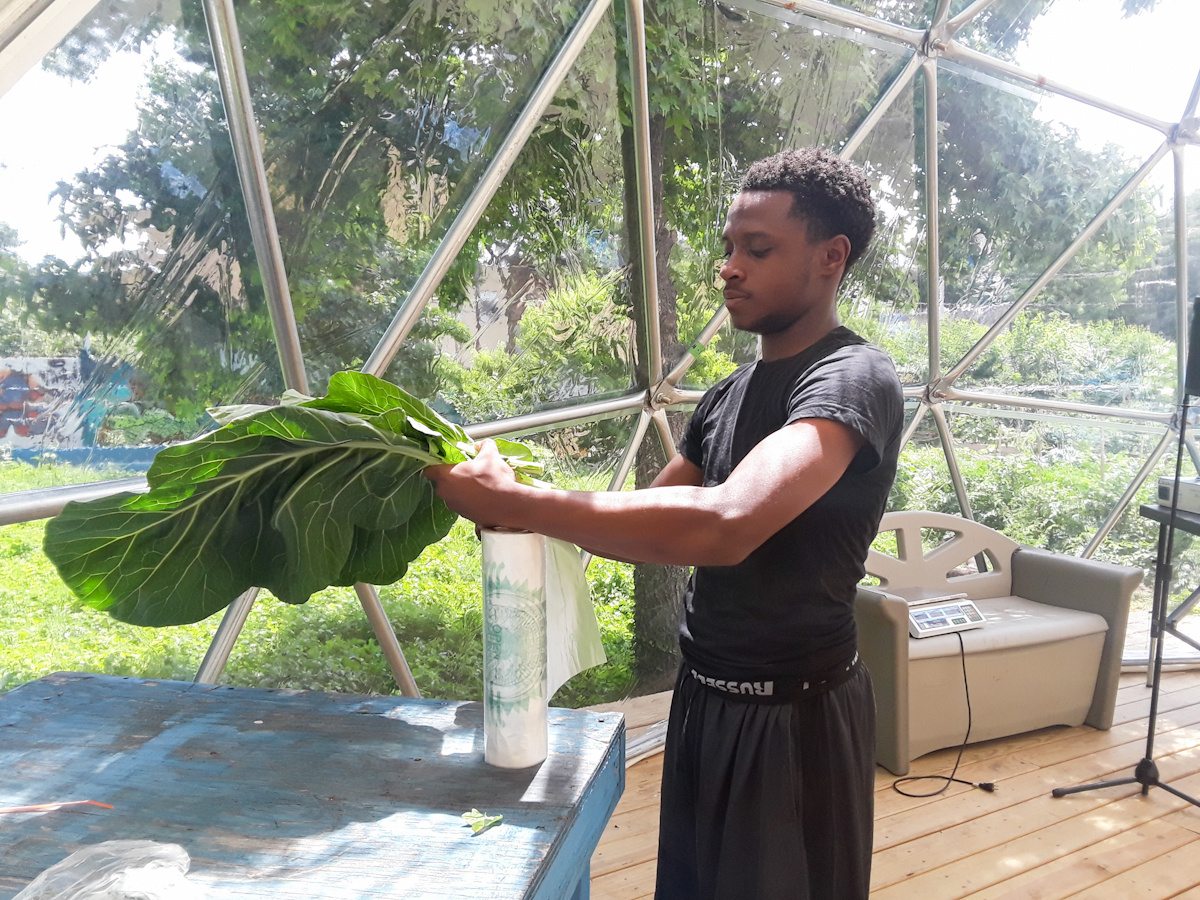 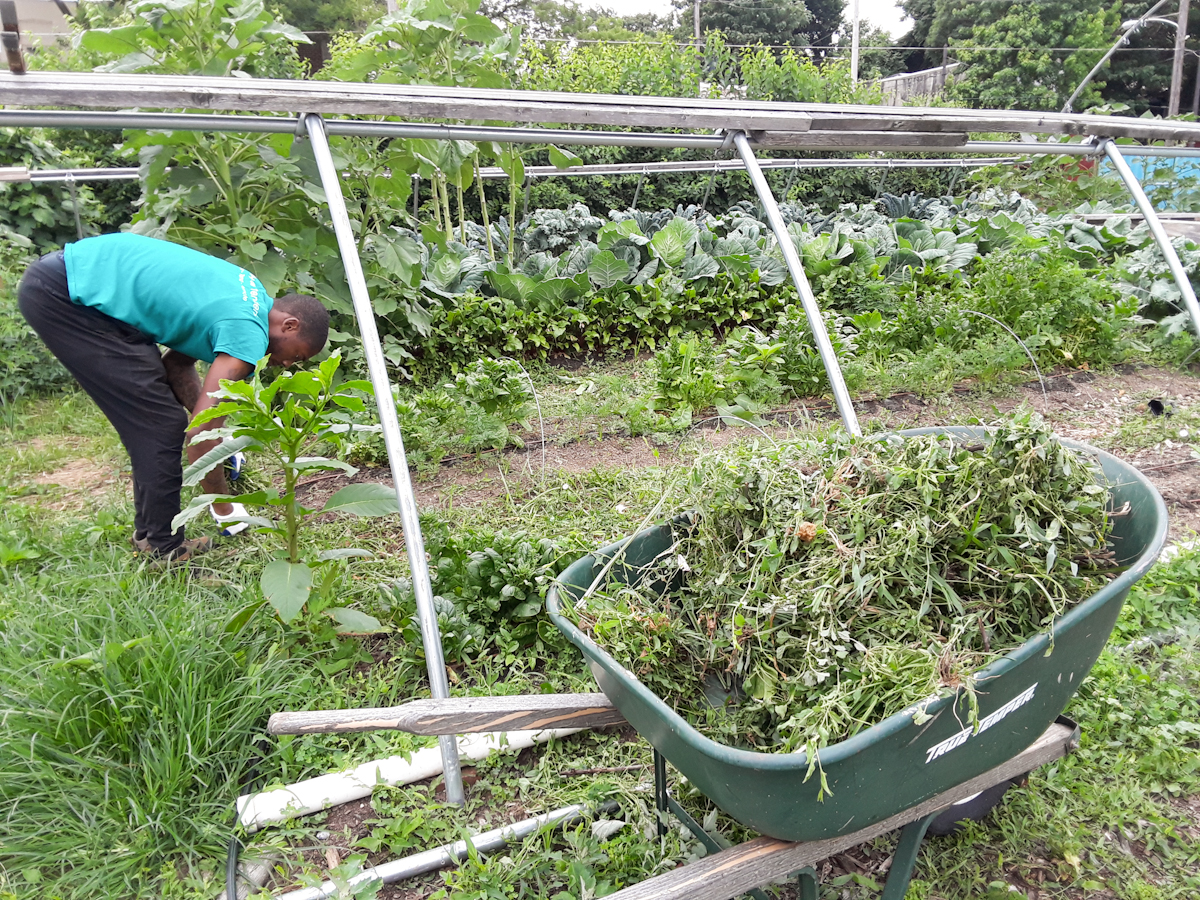 Kale is planted in this section of Life Do Grow farm and harvested for the mobile market. Photo: Trenae Nuri/Next Generation Radio 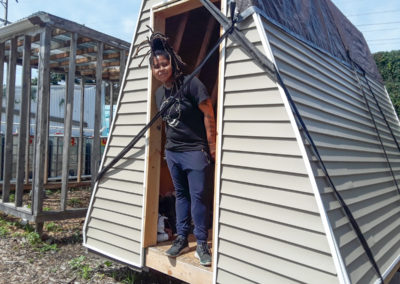 Jeaninne Kayembe, co-founder of Life Do Grow farm, steps out of a storage unit. 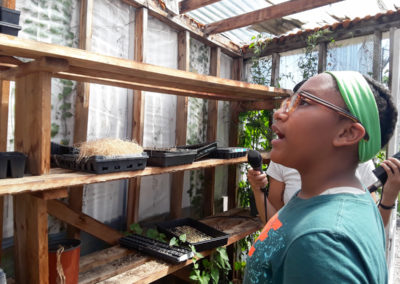 Imani Issac, 12, describes the work she does at the farm. 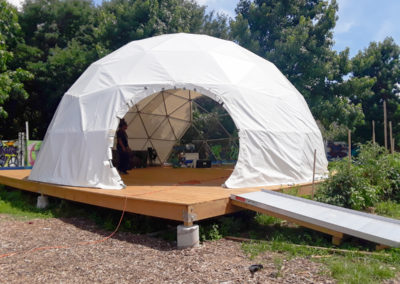 The geo-dome was built by members of the Life Do Grow farm for a June wedding. 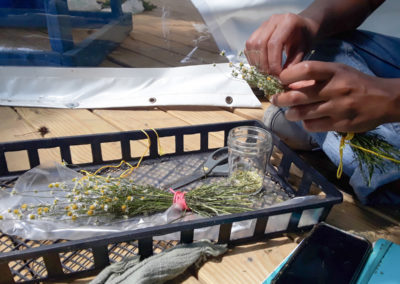 Miranda Gibson crumbles dried chamomile that will be used for tea. 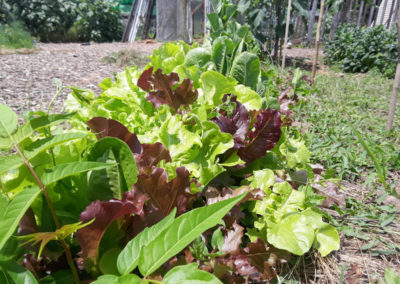 This is a row of bib lettuce in the Life Do Grow farm. 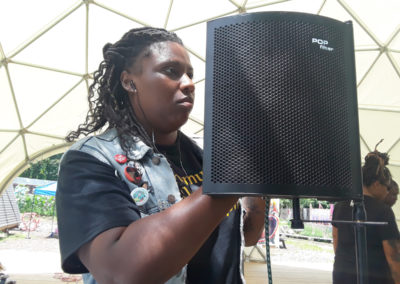 “Isis Tha Saviour” is setting up her microphone to record music in the geo-dome on the Life Do Grow farm.