Undocumented, unafraid and groomed for success

My story is on Luis Sandoval, a DREAMer and DACA recipient who has been living in Philadelphia since he emigrated from Mexico at the age of six. He’s now a barber at South Street Barbers in South Philly, and he hopes to one day open his own barbershop.

Undocumented, unafraid and groomed for success

You probably recall your childhood being a simpler time — a time where imagination and curiosity made the world a colorful place.

However, for Luis Angel Sandoval, age 24, that was not the case.

While many kids were at home playing with their toys or taking part in a competitive game of tag with their neighborhood friends, Sandoval was escaping poverty in his hometown of Juarez, Mexico. On a cool, summer morning, Sandoval recounted his journey emigrating from Mexico to the United States with his mother and younger sister. He was six years old.

“I do remember a vivid part where we crossed the border, we were on a bridge, it was night time,” he said in the backyard of his parents’ North Philly home. “We crossed the border and met with my father at the end of the border on the U.S. side, and we continued our journey to Texas… and eventually to Philly.”

The oldest of three siblings, Sandoval grew up in a country where the language and culture felt strange to him at first.

“I would go to school and would be miserable and break down because I did not know English, I didn’t know any way to communicate with kids around me,” he reminisced. “That was very intimidating. I would just break down and cry in school because I didn’t want to be [there].”

As years went by, Luis picked up the language swiftly with the help of his peers. However, his parents enforced a Spanish-only rule at home to ensure his native language didn’t fade away. Nonetheless, despite becoming a fluent English speaker and making his U.S. living experience simpler, residing in the States still wasn’t a walk in the park. Due to his status as an undocumented immigrant, Sandoval has lived in a country where his opportunities are limited.

“It all made sense to me when everyone in high school was filling out job and work applications…FAFSA [Free Application for Federal Student Aid], and Federal aid from the government,” he said. “Anything that they needed to be successful, I couldn’t do.”

But Sandoval found his blueprint to success on his bedroom’s radiator heater, where his only two hair clippers rested.

He put those clippers to use, giving haircuts to his closest friends and family members in his room. Gradually, what started out as a simple set-up—two clippers, a folding chair, and a floor-mounted radiator heater to lay barber equipment—transformed into a personalized salon, with furniture you’d find at a barbershop taking up more than half of the space in his room. Sandoval admitted to sacrificing his bed and space for his clothes to include barbershop furniture and decorations in his bedroom. He placed a black, worn-out barber chair that was gifted to him in the center of his room; a metal mirror accompanied it.

“Barbering is something that helped me get a little bit of cash during high school,” Sandoval said. “I’m illegal, so I can’t just go into a retail store and put an application in for a summer job or full-time job.”

Three years after graduating high school and working under-the-table at a restaurant, Sandoval earned legal status under the Deferred Action for Childhood Arrivals (DACA) program. It is with this opportunity that he enrolled in barber school so he could receive his permit to cut hair in barbershops.

Today, Sandoval works at South Street Barbers in South Philly. He hopes to gain enough experience in the business to one day open his own barbershop.

Despite his triumphs, Sandoval continually struggles to live a free life, actively “feeling like a prisoner” in the only country he’s ever known, according to him.

“You can’t leave the states, you can’t travel, you can’t get a mortgage because you’re on a visa… can’t make any long-term plans past two years,” he said. “It’s sad and depressing living with the fear of deportation…that all I have here can be taken at any second, and I would have to go through the process of crossing the border again.” 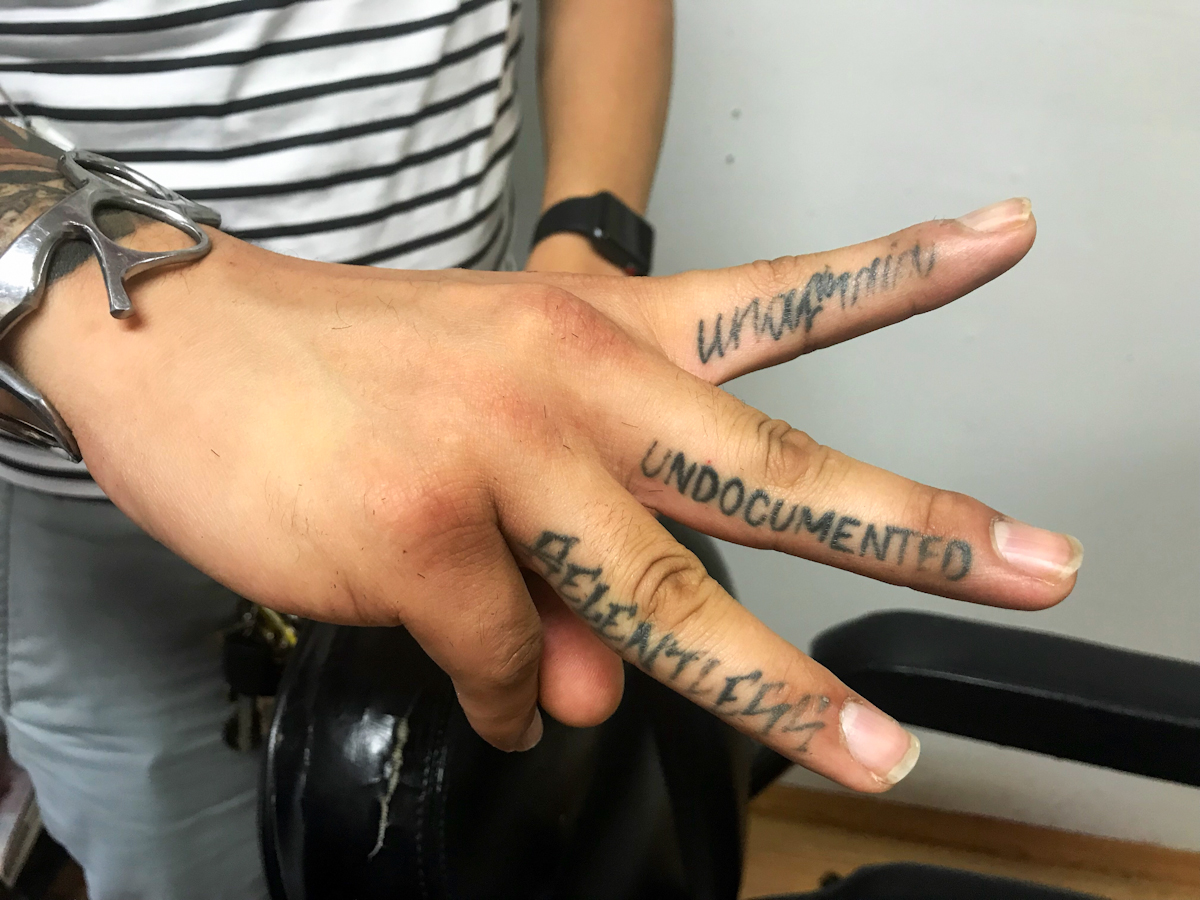 Unafraid. Undocumented. Relentless: Sandoval jokes that if he wanted a job in the corporate world, he would have not tattooed his fingers. 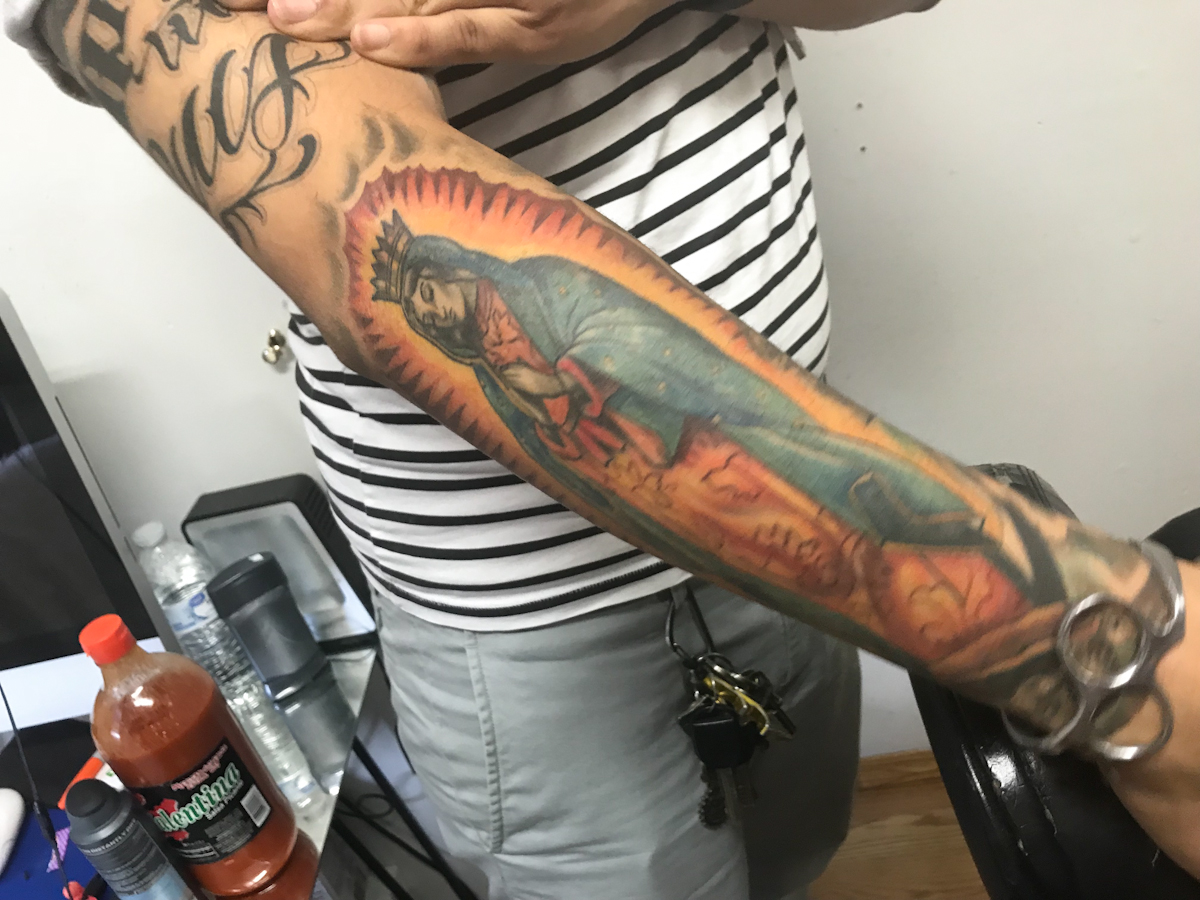 Sandoval’s most colorful ink lays on his right forearm – a portrait of La Virgen de Guadalupe. 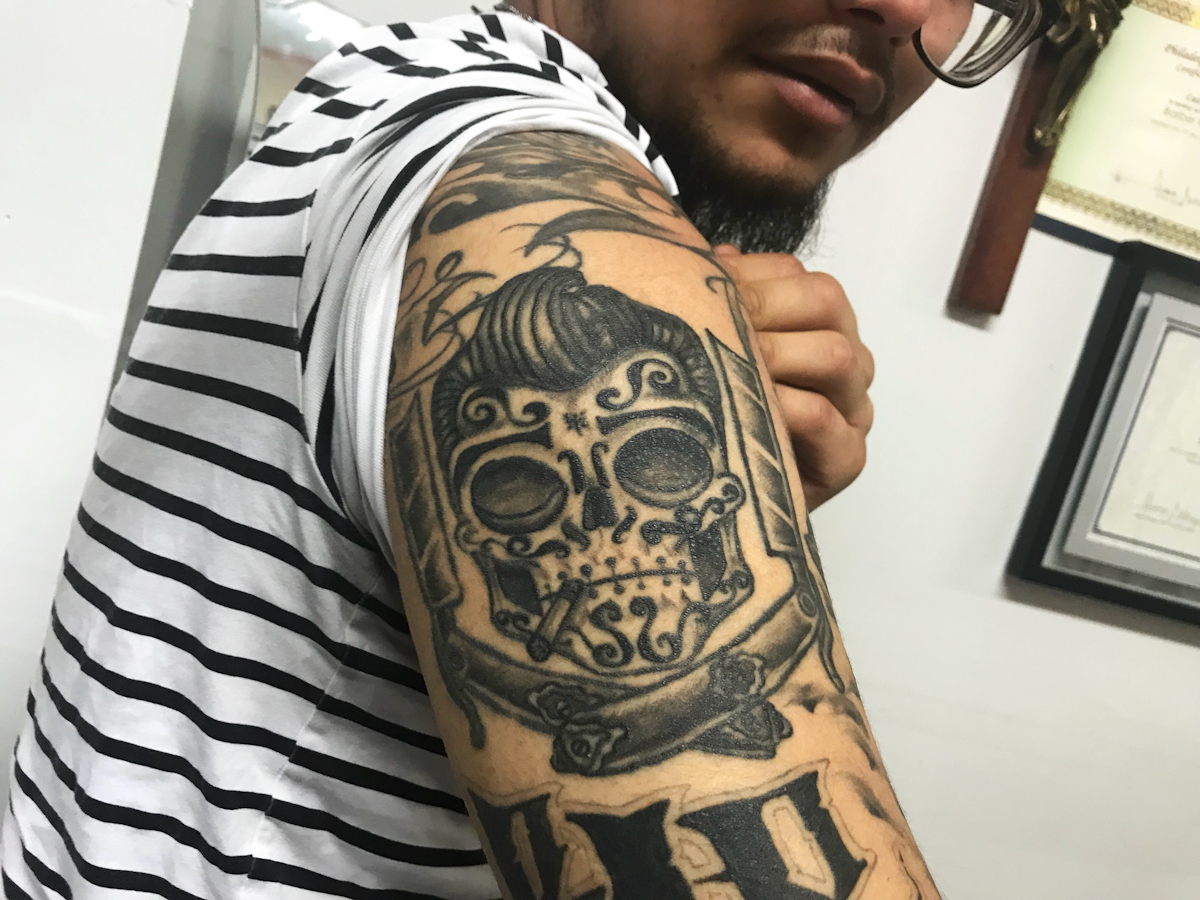 Barbering has played a huge role in Sandoval’s personal development, and he acknowledges that with a tattoo slick-haired skull with razor borders. 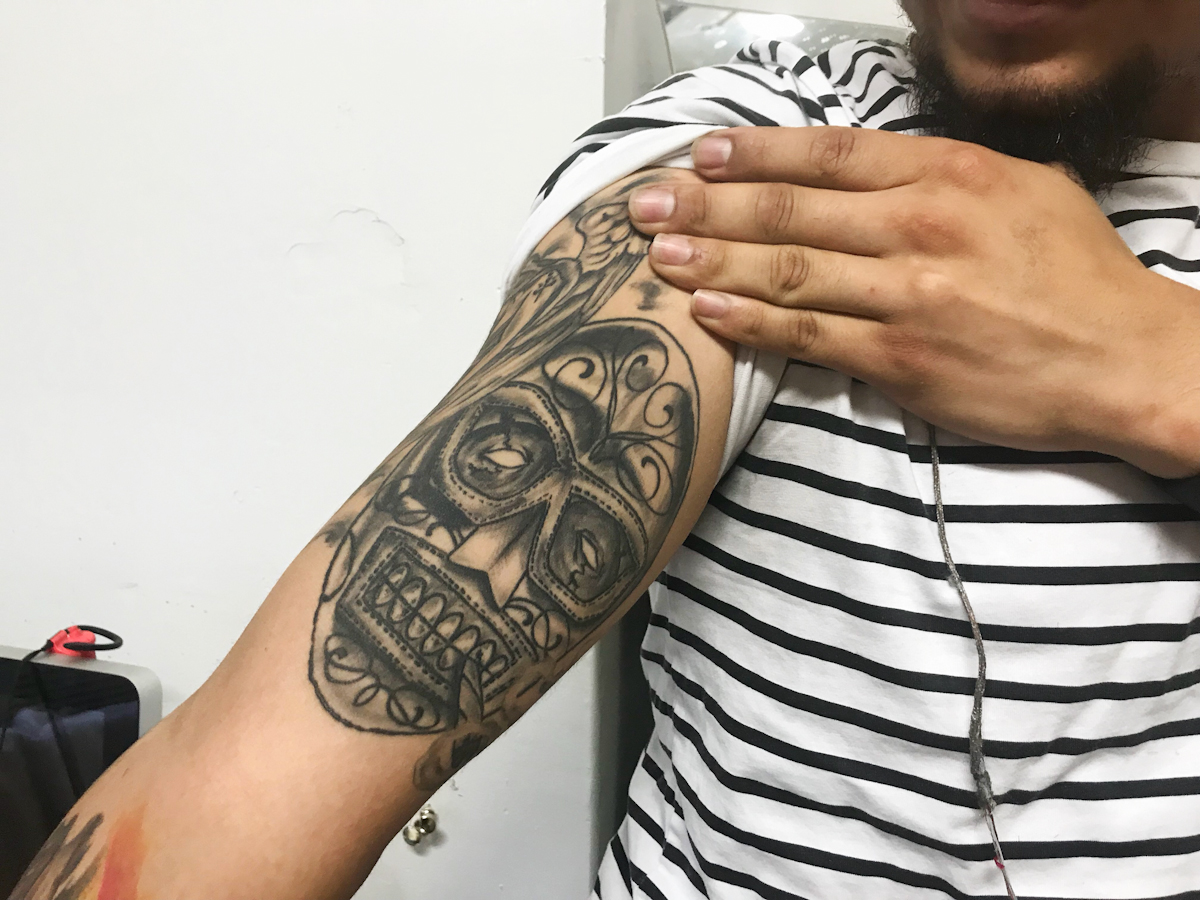 The Juarez native shows off his luchador tattoo. Lucha Libre, also known as Mexican Wrestling, is a huge part of his country’s pop culture. 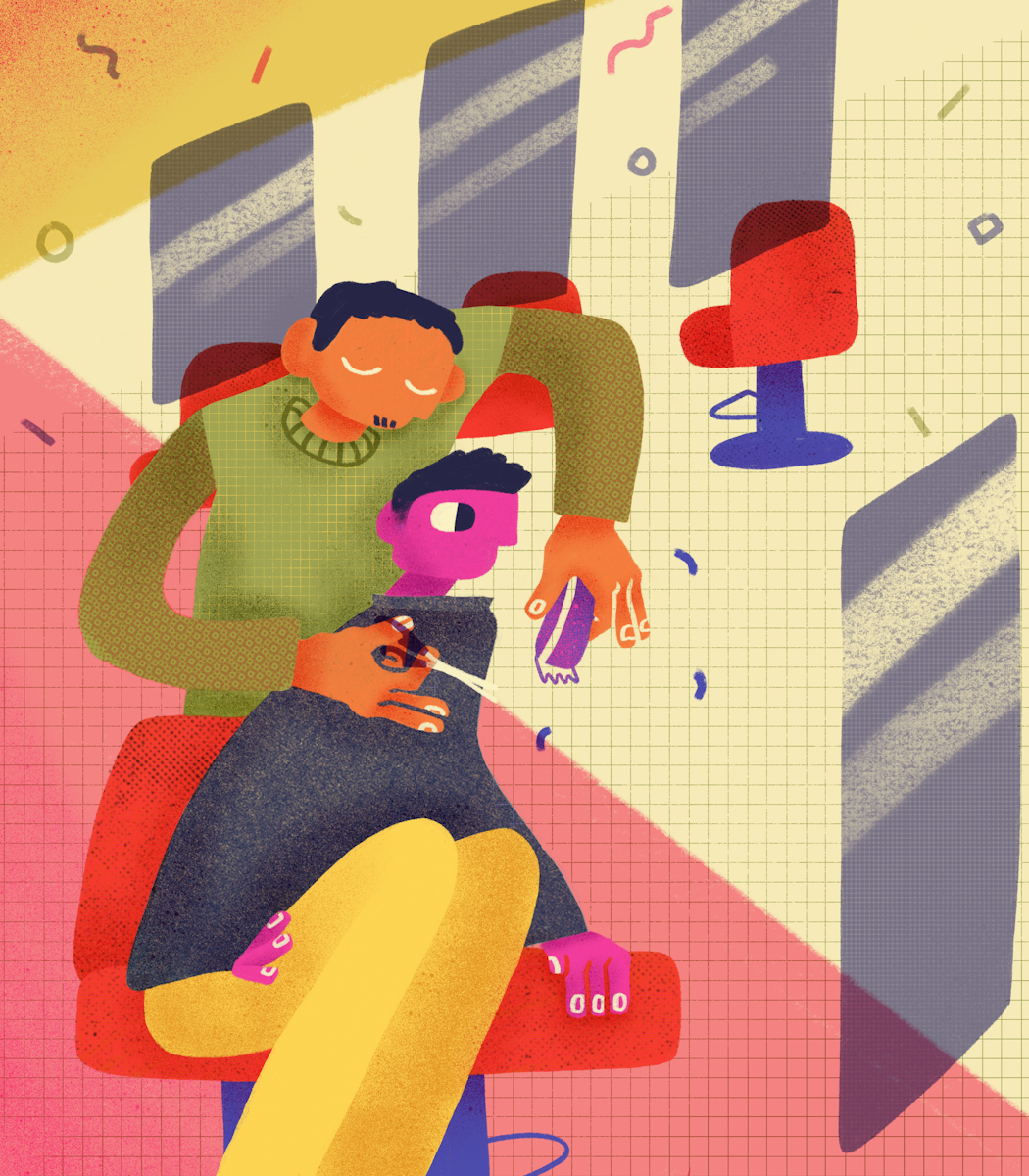 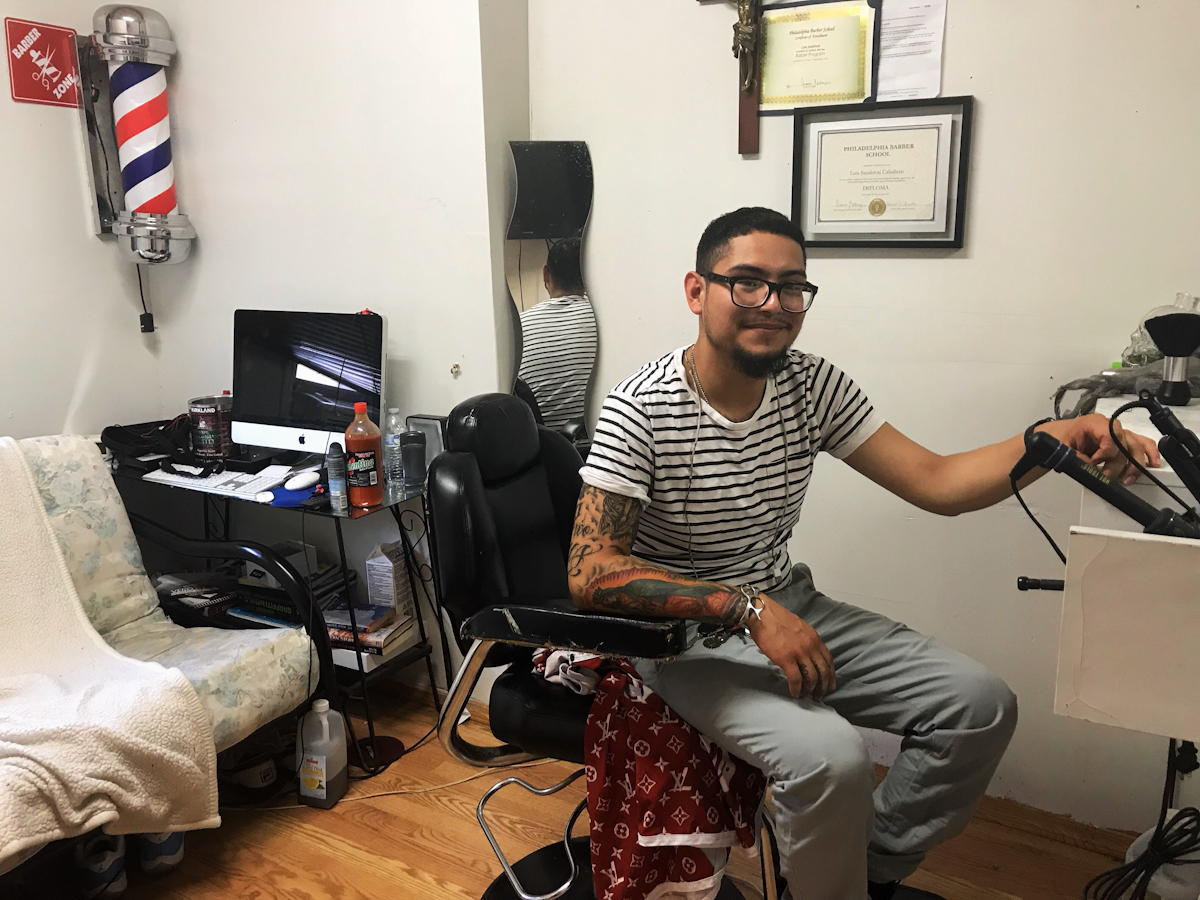 Sandoval transformed his bedroom into a personal barbershop where he cuts the hair of his closest friends and family members. Photo: Roy Aguilar/Next Generation Radio 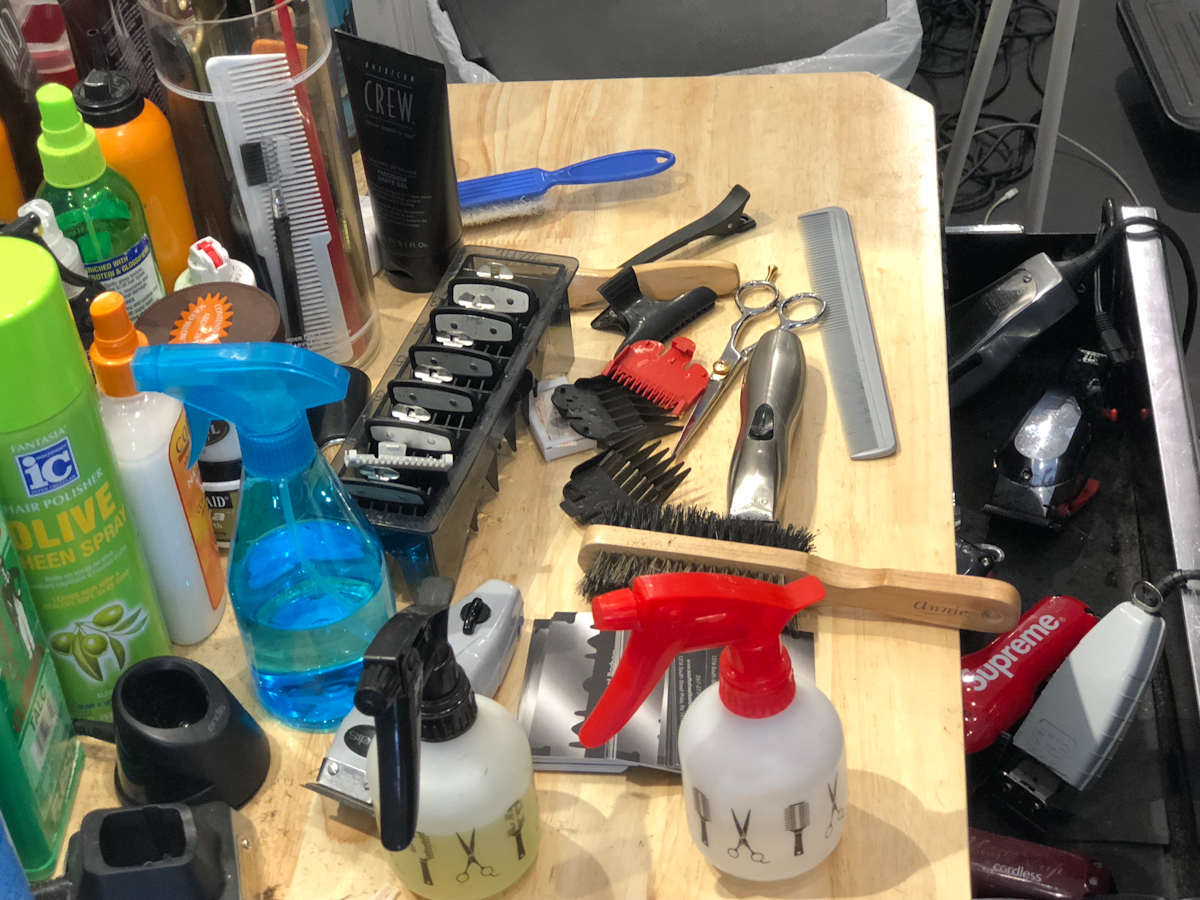 Sandoval has personal barber equipment, which never leaves his bedroom, separate from the kit he uses at his job (pictured). Photo: Alexis L. Richardson/Next Generation Radio 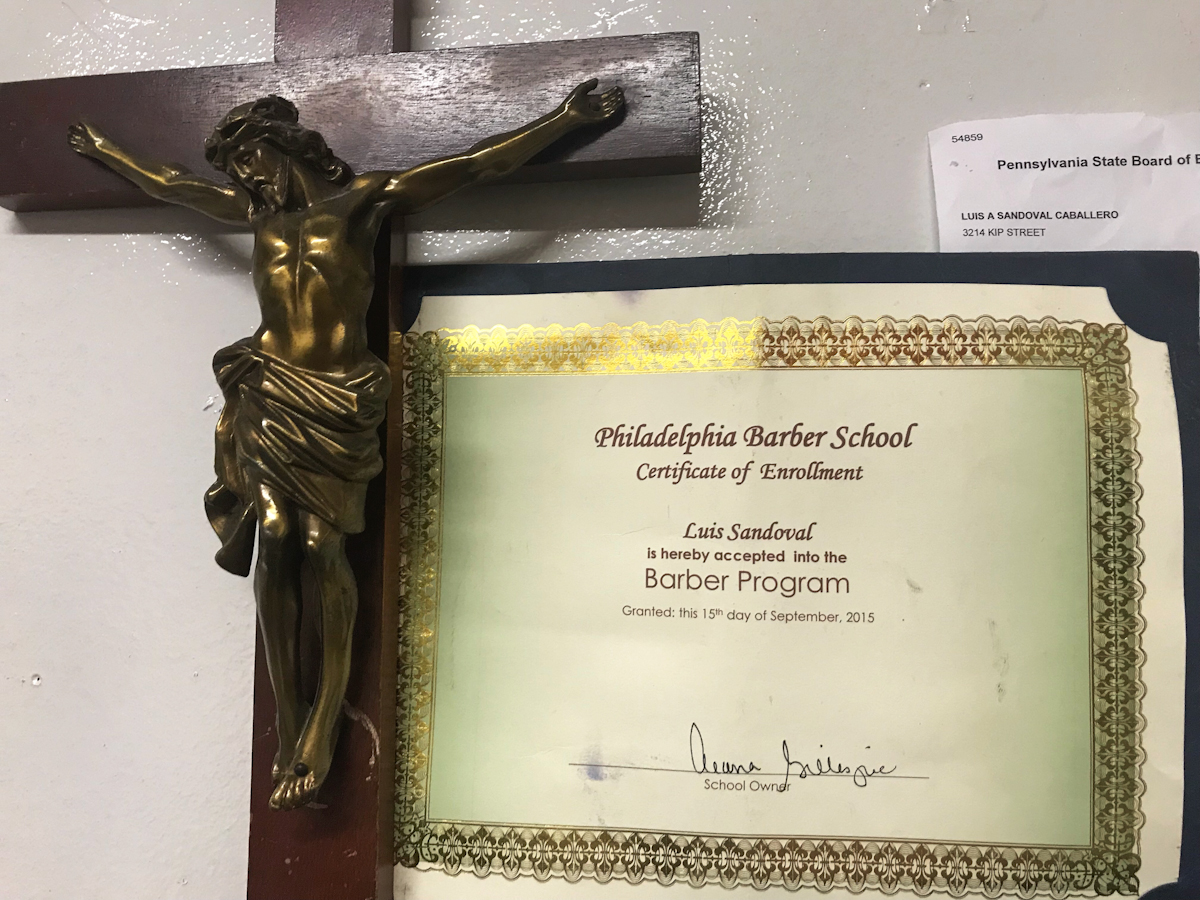 Being a DACA recipient enabled Sandoval to enroll in barber school in 2015. He graduated with over 1,250 hours of practice two years later. Photo: Roy Aguilar/Next Generation Radio 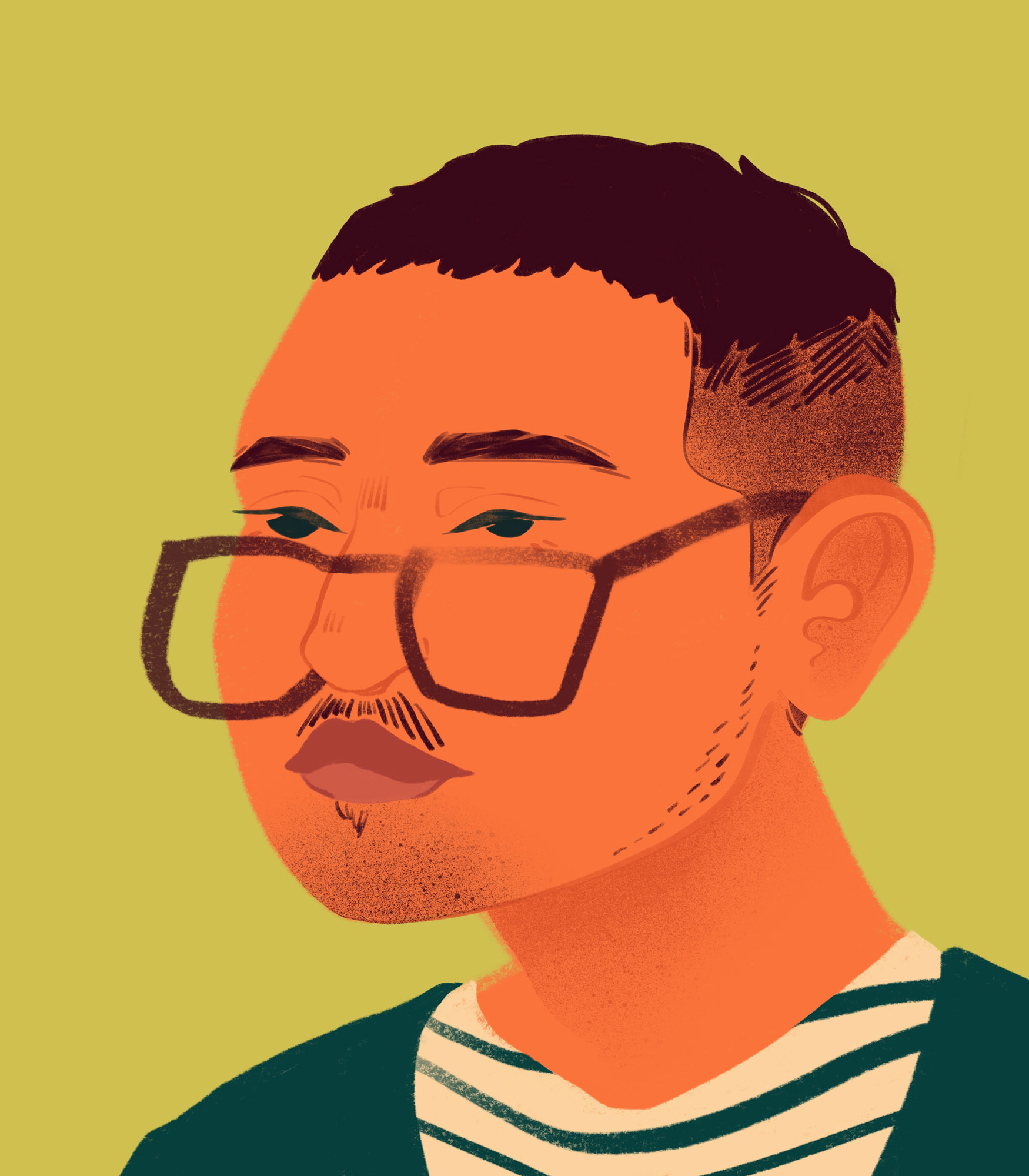